The dawn chorus at Newport Wetlands 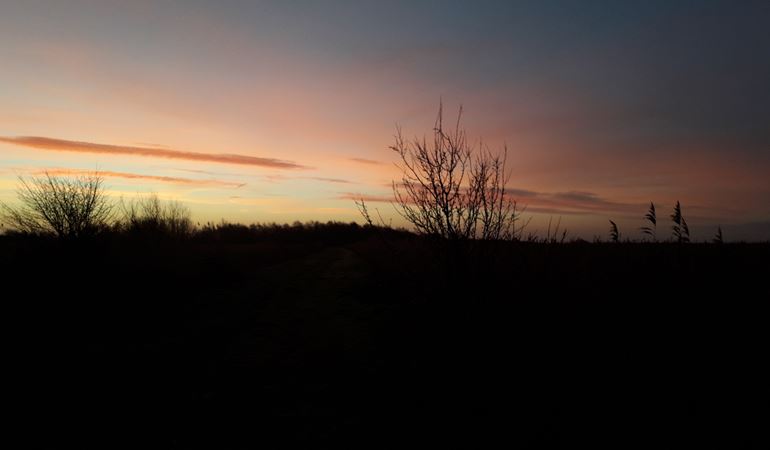 Each month our teams write a blog about the special places they look after. Here, Kevin Dupé, our Reserve Manager, talks about the rare bittern that booms during the magical dawn chorus at Newport Wetlands.

Newport Wetlands National Nature Reserve has over 58 Hectares of reedbeds which is a very scarce but important habitat. Made on old fly-ash lagoons from the nearby coal fired power stations 20 years ago with the aim to provide habitat for bitterns to breed in.

Bitterns are a rare type of heron that live exclusively in reedbeds and their camouflage is amazing. They hunt fish, amphibians and small mammals along the edge of the reeds – the more ‘edge’ you have in the reedbeds, the more habitat you have for bitterns to hunt.

The reedbeds are ‘perched’ 5m above the surrounding Gwent Levels and there is no water flowing into them. The only water supply is rainfall and luckily, we get plenty of that!

When the reedbeds were created there were no fish in them at all but stickle-backs will find their way into most water bodies quite quickly - some say that their eggs stick to ducks’ feet!

Eels can travel short distances overland and could certainly find their way up the outfalls from the reedbeds. To make it easier for them we installed “elver ladders” which were basically pipes with rope and netting inside them and a constant trickle of water.

Around 8 years ago we introduced over 4,000 small rudd. These are ideal prey for bittern as they feed near the surface. They grew quickly and started to breed, also providing great food for cormorants, grebes and otters. 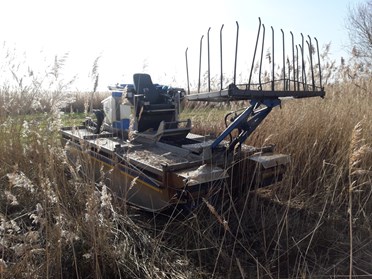 To help create more ‘edge’ for bitterns to feed along, we started mowing pools and channels in the reedbeds.

We did this by hand at first by using a pedestrian mower and raking up the reeds, but now we have an amphibious reed-cutting machine called a Truxor which can both cut the reeds and rake it. It is used on our sites all over Wales.

Every February I spend about 2 weeks using the Truxor at Newport Wetlands. It’s enjoyable work, although it can get very cold sat in an open cab for 7 hours a day in all weathers.

This year it was fairly dry and very mild. It took me about 5 days to cut everywhere that needed cutting – along the deep-water channels to stop the reeds encroaching, along the channels cut into the reeds and around the edge of the pools.

I hadn’t seen a bittern the whole time but as I finished doing the last bit of cutting and ‘sailed’ up the deep-water channel to get out of the reedbed, something ahead caught my eye.

Could that be a bittern standing on the edge of the reeds I had just mown? 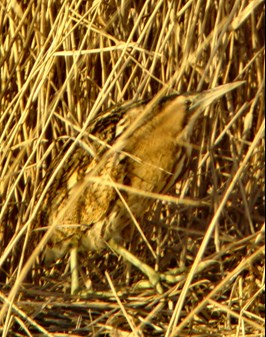 It was approximately 60m ahead of me but I hadn’t brought my binoculars, as I got closer I was convinced it was a bittern.

I switched off the engine and the Truxor drifted closer and closer and I took some photos with my phone’s camera. It was so well camouflaged that you can’t see it! I finally got within 20 meters before the bittern flew off.

I had been working in that part of the reedbed for 2 hours and had made at least 3 ‘passes’ along that stretch of reeds. The bittern must have only just flown in after my last ‘pass’ and the next day it was heard booming from the same area of reeds – it must have appreciated what I had done!

But how many booming bitterns are here?

Every year we carry out a survey using the standard method which must be carried out 2 hours before dawn. This involves walking a transect with several listening points every 200m where you stop and listen for 10 minutes and you need enough points to hear the booming anywhere in the reedbeds.

Before setting out for this year’s survey I set my alarm clock for 4.45am but woke up and switched it off a couple of seconds before it went off!

The dawn chorus at Newport Wetlands is incredible and the hour before dawn is the most magical time of day.

Water rails were squealing like pigs all around me, I heard a bearded tit pinging like a little bell before I saw it flying over the reeds. A marsh harrier sailed over-head, while little grebes “whinnied” like ponies.

Then I heard a single weak boom coming from near the area where I had seen the bittern a couple of weeks before. The “boom” sounds like somebody blowing across the top of a glass milk-bottle (listen to my video carefully below with the sound up and you can hear it). There was another boom 2 minutes later and then 10 minutes later I saw the bittern flying up out of the reeds and then flying westwards.

Two minutes later I heard 5 very strong booms, but from the east of me – so there were 2 booming males. The strong boomer boomed another 9 times – 5 times each time during the next 30 minutes.

Then the sun came up and the booming stopped. It really was worth getting up before dawn.