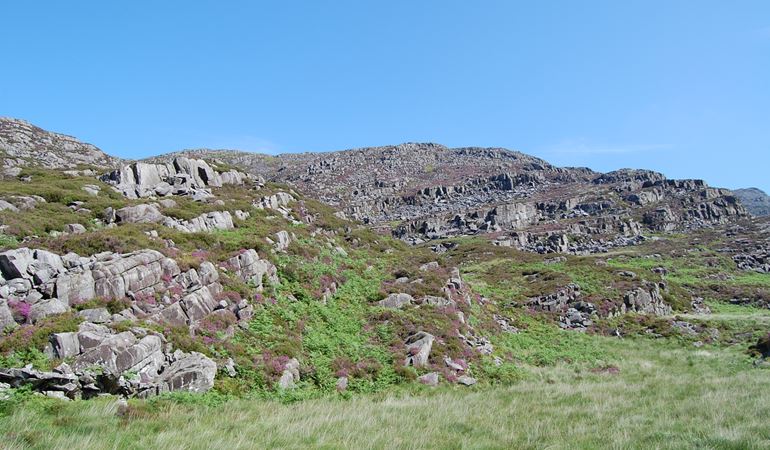 Each month our teams write a blog about the special places they look after. Here, Paul Williams, our Senior Reserves Manager, Eryri Uplands, describes a wet visit to Rhinog National Nature Reserve.

I’m standing in the rain, the thick fog obscuring the usually dramatic summits of Rhinog Fawr and Rhinog Fach, but I’m happy! After the prolonged hot, dry period of early summer, its good to be able to welcome the rain back. The drought had started to leave its mark on the unique landscape of the Rhinog mountains in the west of Snowdonia National Park. Normally a blanket of stunning purple heather, it had become punctuated with parched, reddened vegetation.

More than anything, the rain means a reduced risk of wild fires. Now that the ground is damper, the threat - to the heather and the underlying peat - is reduced, and thank goodness for that, as it would be very difficult to control a fire on this enormous heath. It would have a serious impact on the habitat and its wildlife too.

Rhinog National Nature Reserve (NNR) measures just under 600 hectares; and the surrounding mountainous terrain is much bigger. This is the nearest thing we have in Wales to wilderness. A wild, unspoilt, remote place, where the human influence is less obvious than everywhere else. Though, going by the wealth of archaeological remains seen throughout the massif, it was obviously a busier place of small settlements and farming and ritual in the past. The core of the range is managed today by Natural Resources Wales as an NNR, but it is also a Site of Special Scientific Interest, and a European Special Area of Conservation.

Also, Rhinog NNR is the only land in Wales designated a Biogenetic Reserve. It was given this international recognition due to being the largest extent of mature heather in good condition in Wales. It’s often asserted that heathland cannot survive without regular cutting and burning, but the habitats of Rhinog show this not to be the case. Light grazing is the only direct management employed here, and thankfully so: the topography makes it difficult to work on, and impossible to use vehicles of any kind. 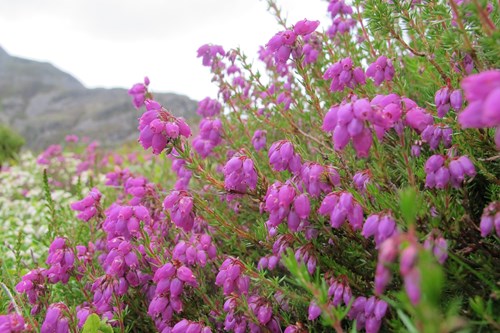 A riot of heather and rock

Gerallt Gymro, or Giraldus Cambricus, a twelfth century traveller, cleric and historian, apparently described the area as ‘the roughest district in all Wales’, and you could argue that little has changed on the ground since then. The description of the Rhinog terrain by naturalist William Condry as an “ankle-testing riot of heather and rocks…”2  always comes to mind, and raises a smile when I find myself battling and tripping my way through the tall vegetation and block scree under foot whilst working on the reserve.

Two main paths cross Rhinog NNR; both connecting the Ardudwy coast to inland Meirionnydd. They follow the low passes of Bwlch Drws Ardudwy and Bwlch Tyddiad through the north-south backbone of granite and gritstone, both no doubt important trade routes in the past. Less obvious paths veer off toward the summits. But you soon realise what Condry meant if you venture off-piste!

Unlike visitor honey-pots such as Wyddfa (Snowdon) to the north, and Cadair Idris to the south (two other NNRs I’m proud to work on), very few people come to Rhinog, contributing greatly to the secluded nature. It’s especially quiet here on a rainy day with low cloud.

But I’m not here to stroll and wander today. I leave to enjoy a hot panad (cuppa) in a dry office, satisfied that the pools - so valuable for dragonflies and frogs - are full of water again, and that the vegetation finally get relief from the drought.

But before I go, I enjoy a handful, or two, of the wonderful fruit of the heath. The bilberries are fat and tasty now…but don’t tell everyone! 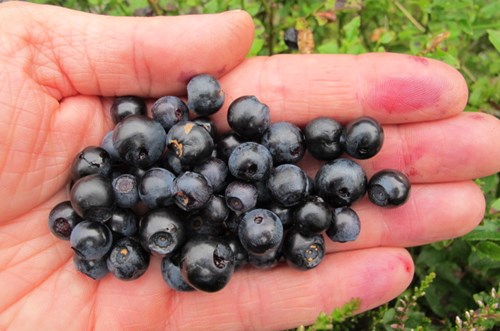