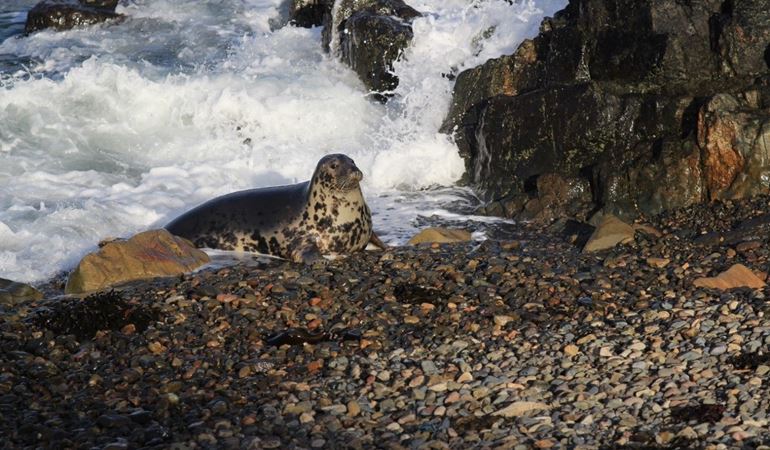 Each month our teams write a blog about the special places they look after. Here, Kate Lock, our Marine Conservation Officer at Skomer, talks about the seals that live in the area and how we work to protect them for the future.

It is not often that we get the chance to enjoy watching wild mammals in their natural environments, which is one reason why seal watching is so magical.

Grey seals, Halichoerus grypus, are Britain’s largest predators with males weighing around 230kg. They are skilful hunters that live in a naturally harsh and tough environment where only the fittest survive.

Grey seals can be spotted along the Pembrokeshire coast year round, but it is in late summer and autumn when large numbers return to the shores to give birth to their pups.

The females, known as cows, give birth to one pup each on quiet beaches or in caves.

Birth to teens in just 3 weeks 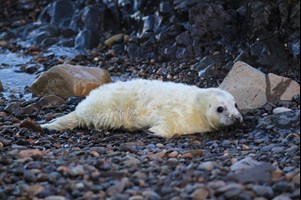 The white furry pups spend their first 3 weeks on the shore, feeding and sleeping.

Some can be pretty active and like swimming, even when they’re less than a week old! But most stay on the shores, sleeping and growing.

The cows regularly come ashore to feed their pups who need to treble their birth weight in their first 3 weeks.

By the time the pup is weaned, the mother will have lost up to a third of her body weight.

The pups are then left to fend for themselves, the white coat is shed and a gleaming new ‘adult’ coat is revealed. 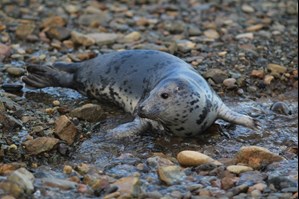 Moulted pups leave the beaches, but regularly return to the shore for rest.

At the Skomer MCZ we monitor the grey seals, tracking each seal pup born from birth to fully weaned.

The pups are born on beaches and caves around Skomer island and on the mainland around the Marloes peninsula.

Regular monitoring began at the island sites in 1983 and then on the mainland in 1992. This means we have a huge amount of data that helps us understand more about the seals, and how the population has changed over time.

This information has also helped develop a management plan which helps to minimise disturbance to the seals. This includes speed limits close to shore, and closed zones during the pupping season. Zone maps and a seal watching leaflet are provided to visitors to help them observe seals without causing disturbance.

Seal watching: a guide to observing seals and pups 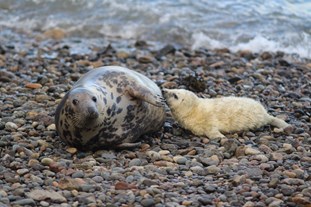 When: August to December

Where: On beaches of the Marloes Peninsula and Skomer Island, Ramsey and remote parts of the North Pembrokeshire coast.

How: Seals are easily disturbed. Please keep as still, quiet and inconspicuous as possible. Never approach seals close up. If disturbed, mothers will keep away and the pups will miss feeds. Sometimes the mother may become aggressive or may abandon her pup.