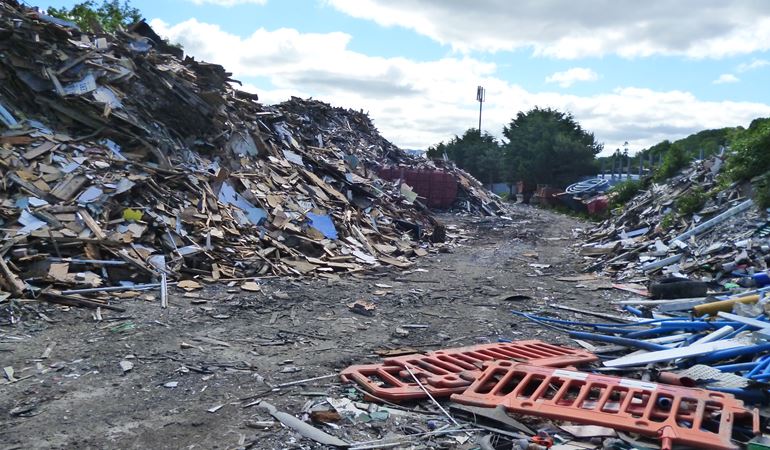 We have taken action against a north Wales skip hire company due to the risk of serious pollution at its yard.

Porthmadog Skip Hire has been storing far more waste than it is allowed on its yard and this is now considered to pose a risk of serious pollution, particularly if it results in a fire.

The company was issued with a legal suspension notice to stop it taking any more wood or degradable waste onto its site at Penamser Industrial Estate, Porthmadog. However the company appealed against that notice last autumn.

The Planning Inspectorate has now upheld NRW’s notice and the company can not accept any more wood or degradable waste at the site until it complies with the conditions of its environmental permit.

If the material caught fire the smoke could affect people nearby, the cost of bringing the fire under control would be significant and the firewater run-off could pollute local water courses.

Porthmadog Skip Hire has previously failed to comply with legal notices from NRW to reduce the amount of waste on site and has continued to accept further waste without reducing the amount that was already there.

North Wales Fire and Rescue Service has also raised significant concerns about the site and has issued a Notification of Major Deficiencies which highlights issues which need to be addressed to reduce the risk of fire.

David Powell, Operations Manager for Natural Resources Wales, said: “The decision to stop wood and degradable waste being brought on to the site is a last resort, but there is a risk to people in Porthmadog and the surrounding environment.

“Waste sites have a permit setting out rules which they have to follow so they don’t pose a risk to the environment and local people.

“We gave the company every opportunity to comply with the conditions in their permit but they have not done this."

Under the terms of their environmental permit Porthmadog Skip Hire can keep up to 5,000 tonnes of waste per year on site which must be stored in appropriate areas.

NRW estimates that there is currently 7,800 tonnes of waste on site which is not stored correctly.

Geraint Hughes, County Safety Manager at North Wales Fire and Rescue Service, said: “Situations such as this present a significantly increased risk of fire. It is our duty to protect the public against such risks and work collaboratively to address them.

“A fire at this premises could potentially tie up our resources for a considerable length of time, put the lives of our firefighters and of the public at risk, as well as cause irreversible damage to the environment.

“Of great concern to us in this particular case is the potential for such a fire to spread to neighbouring properties - and this is a risk that we simply cannot ignore.”