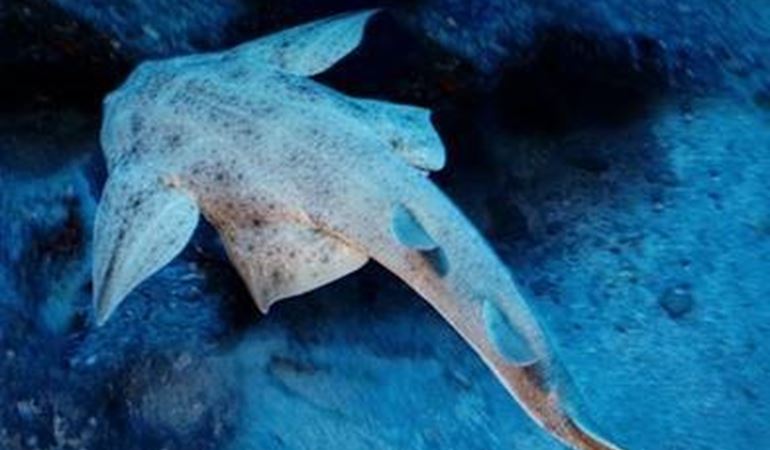 Could local communities help save the Critically Endangered Angelshark?

In an exciting collaboration between fishers and conservationists, a new project focused on demystifying the threats and history of the Critically Endangered Angelshark (Squatina squatina) off the coast of Wales, launches today, 17 July 2018.

Fishers, divers, school children and those over the age of 60 - and everyone in between - are being asked to get involved in this pioneering new project that aims to safeguard this unique species, once abundant in Welsh waters.

‘The Angel Shark Project: Wales’ led by international conservation charity ZSL (Zoological Society of London) and Natural Resources Wales (NRW) will be run alongside twelve other partner organisations. The project aims to shine a spotlight on one of the world’s rarest sharks by working with five coastal communities across Wales. Data gathered from community memories, historical research, fisher knowledge and citizen science surveys, will help build a better understanding and conservation plan for the species.

“We have an exciting opportunity to understand and improve the status of Angelsharks in Wales, which is potentially one of the last strongholds for this amazing shark. Our approach of combining conservation and social science is a method that we hope will provide benefits to both the population of Angelsharks, but also to local communities we’re working with that rely on the ocean for their livelihood”.

Angelsharks - once common across the western British Isles, can be found gliding across the seabed with their wing-like fins. Growing up to around two and a half metres (around eight feet) in length but are non-threatening to humans, they live mainly on sand or mud at the bottom of the sea, preying on small fish and molluscs.

Despite suffering widespread decline across the east Atlantic Ocean, Mediterranean and Black Seas over the last century, they have been increasingly reported off the Welsh coast, giving new hope for the future of the species.

“We are hugely grateful to the 12 fishers we worked with during our pilot project last year who helped to shape this exciting and innovative new project. Accidental captures of the shark show that Cardigan Bay in mid Wales could be an important area for the species. This data will be vital in building a clearer picture of the status and ecology of Angelsharks in Wales as well as informing the Wales Angelshark Action Plan, which we hope will help guide the project towards success”.

“Wales is a proud nation and this year we are celebrating our Year of the Sea. Our seas support awe-inspiring habitats and species of national and global importance.

I am delighted to be able to support this project, which brings together our coastal communities, fishers, scientists, conservation groups and Government to work collaboratively to provide much needed data on this critically endangered species. Data which will improve our understanding of the species ecology and distribution, so we can better conserve the species in our waters for future generations. I encourage our communities, from the young to our older generations, to engage and be part of this new and exciting project”.

The project will gather data on Angelsharks across Wales, with focused stakeholder engagement in five key areas: North Anglesey; the Llŷn Peninsula; Porthmadog to Aberarth; Fishguard to Milford Haven; and Swansea to Porthcawl.