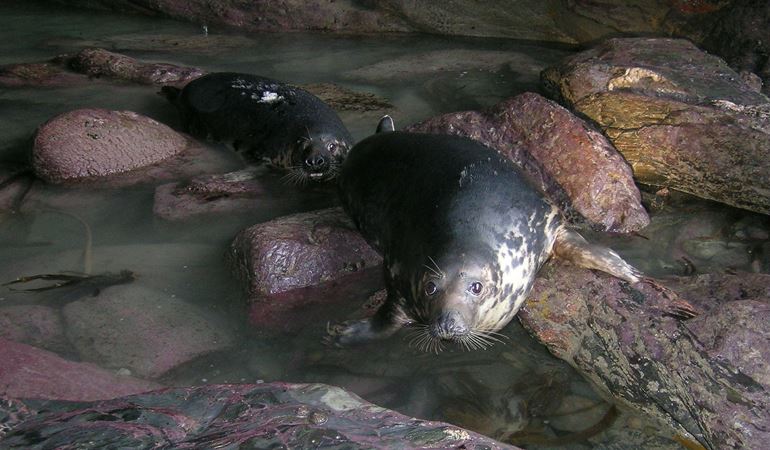 The grey seal is one of Wales’ most charismatic wild animals with a reputation of being playful and friendly.

But new behaviour, thought to have been filmed for the first time anywhere in the world, shows another side to their character.

The footage, taken by a local wildlife watching operator in Pembrokeshire, shows an adult male grey seal biting and eating a harbour porpoise it has just killed.

This video supports a new research paper to be published in the Aquatic Mammals journal. The paper is authored by a group of naturalists, conservationists and Natural Resources Wales (NRW) scientists and reports on this predation phenomena, previously only reported off the coast of Europe. To their knowledge the behaviour has never been caught on video, until now.

The lead author, Tom Stringell, Senior Marine Mammal Ecologist at Natural Resources Wales, said: “Monitoring protected habitats and species improves our understanding of our marine environment. The Pembrokeshire coastline is an important habitat for a wide variety of marine life, including grey seals, harbour porpoises and other marine mammals.

“With reports of grey seals feeding on harbour porpoises off the coast of Belgium, France and the Netherlands in the past, we were surprised to see this behaviour here in Wales.

“We observed this happening on four separate occasions off the coast of Pembrokeshire. But, it is unclear how long this has been going on for, and why.”

Seals normally feed on fish, but this footage shows they will also take much larger prey. Harbour porpoise can grow to almost two metres in length and weigh up to 80 kilogrammes (176 pounds – or 12 stones).

It is unknown what is behind this unusual behaviour, but it could be due to competition for food from an increasing seal population, or just opportunistic hunting.

Dafydd Rees of Voyages of Discovery who recorded the footage said:

“I’ve been working on this stretch of the coast, but have never seen anything like it before. It was really surprising to see and capture the footage.

“I think it’s really good that Tom and his team have been able to use the footage to help us understand more about grey seal behaviour.”

Tom added: “Adult grey seals have also been known to attack, kill and eat juvenile grey seals, so this type of activity isn’t totally surprising and is likely part of the natural cycle of life.

“Seals are unlikely to pose any direct danger to people. However, they are wild animals that possess sharp teeth and are a protected species, so they should not be approached on land or in the water, particularly during the autumn pupping season.”

The seal population in Pembrokeshire is the largest in southwest Britain and are a feature of the Pembrokeshire Marine –Sir Benfro Special Area of Conservation. Thousands of people flock to the Welsh coast each year to admire its rich wildlife, which also includes the largest population of bottlenose dolphins in the UK.