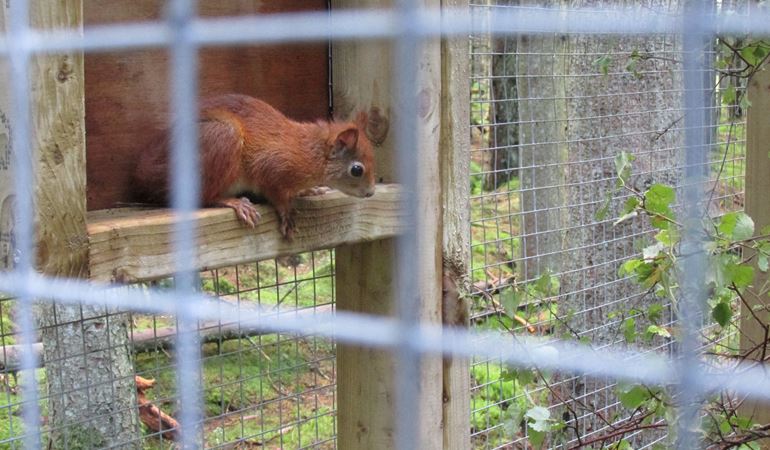 Red squirrel populations in a North Wales forest stronghold are being given a boost by Natural Resources Wales (NRW).

In 1998 there were up to 400 squirrels in Clocaenog forest near Ruthin.

But now that figure is thought to be less than 50 and as part of a project to secure their future, seven squirrels have been released in the area.

“Red squirrels are an important part of our environment, our heritage and our culture in Wales and we have a duty to protect them for future generations.

“Clocaenog forest has a mix of tree species which is great for the red squirrels who live here and feed on the seeds.

“We work hard to manage the forest in a way that benefits them, but our monitoring over the last ten years has shown a population decline.

NRW worked with Red Squirrels Trust Wales (RSTW) and The Welsh Mountain Zoo – National Zoo of Wales at Colwyn Bay which supplied some of the squirrels after they were bred in captivity and co-ordinates the breeding programme across other zoos and private breeders.

Other squirrels were donated by the Wildwood Trust in Kent, Walton Park Gardens, Dudley Zoo and Pensthorpe Natural Park in Norfolk.

Local volunteers helped build two enclosures in the forest which provides the squirrels with a safe base as they get used to their new home. The work contributes to a UK-wide collaboration called Red Squirrels United (RSU).

After 4 weeks, the enclosures were opened and the squirrels were given access to the forest.

NRW placed nest boxes and feeders in the forest so they can adjust slowly to forest living.

“We hope that these new squirrels will boost breeding and make the population stronger.

“They will be monitored closely by RSU volunteers over the coming months and years to track their progress, and, if they succeed, hopefully we will be able to release even more squirrels in the area.”

Julian Mason, a volunteer for the project in Clocaenog forest described the work they did:

“It’s been a real joy to be part of the reinforcement project. From building the enclosures to seeing the new reds arrive and then being released into the forest. Knowing that we are giving the reds a chance to build a sustainable population in what should be their home forest.

“There is a great bunch of volunteers who have been well supported by several conservation professionals. We’ve worked hard as a team because we all want to see red squirrel conservation succeed in the forest.”

Clocaenog is one of three priority areas for red squirrel conservation, along with Anglesey and mid-Wales.

NRW plans to release more red squirrels in the area later this year.