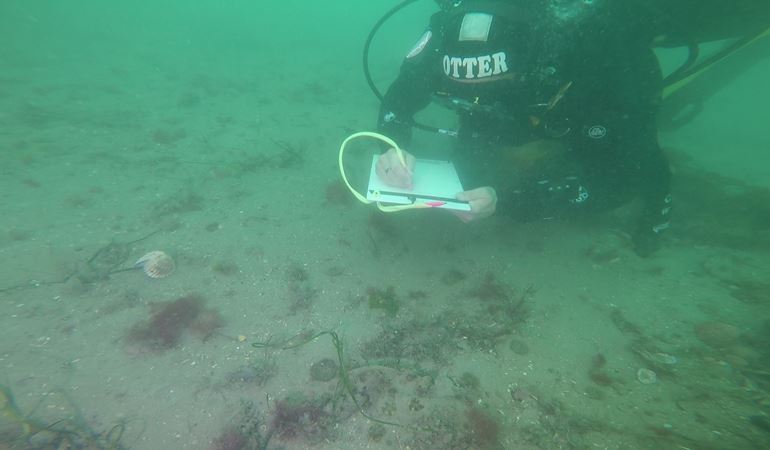 The fan shell (Atrina fragilis) was found whilst NRW divers were monitoring the condition of a large seagrass bed in Milford Haven. This is currently the only known living example in Wales as it has not been spotted in Welsh waters since the 1960’s.

Fan shells, provide a point of attachment for many other marine organisms creating reef-like micro habitats in the sediments in which they live.

“We were surprised and pleased to find the fan shell, targeted searches had previously only uncovered a few broken shells.

“Although fan shells can grow quite large and lie mostly buried in the seabed, they are very susceptible to physical damage, particularly from mobile fishing gear, anchors and mooring chains.

“This shellfish was found in the Pembrokeshire Marine Special Area of Conservation and measures to reduce anchoring and mooring activity around the seagrass bed will help promote recovery of the local fan shell population.

“Our divers will carry on monitoring the water and wildlife in Milford Haven so that we can learn more about the areas marine wildlife and how to protect it in the future.

“We monitor seagrass at sites across Wales. It is an important part of our marine ecosystem and acts as a nursery for fish like sea bass and cod; it also produces oxygen.”