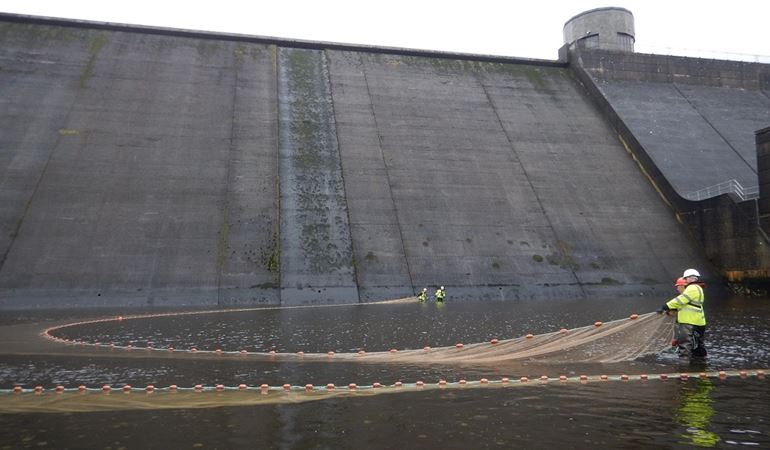 Natural Resources Wales (NRW) officers found a silver surprise during a recent operation to relocate fish from the Llys-y-fran reservoir spilling basin – a large overspill pool - to the Afon Syfni in Pembrokeshire.

Officers were surprised to find a large number of young salmon and trout living in the stilling basin – an unexpected home as they usually prefer to live in rivers and streams.

It was a lucky find as NRW had been called in by Dŵr Cymru Welsh Water to assist with the relocation of fish from the basin ahead of it being drained down.  The basin is being drained to enable the not-for-profit utility company to install a hydro turbine at the reservoir which it will use to generate green energy.

In total, approximately 500 fish – mainly trout and a few salmon - were successfully released into the Afon Syfni just downstream, either to take up home in the river or to continue their journey on to the sea.

Other species, such as rainbow trout, roach, gudgeon and sticklebacks were also captured and were released back into Llys-y-fran reservoir.

“It was interesting to find smolting salmon and trout outside of their usual habitat and to see how they’ve adapted to different environmental conditions. These are young fish which are biologically changing and preparing to make their first journey from river to sea.

“We’re not sure why they had established such a population at this location, but judging by the size and quality of fish we discovered, it’s a good habitat that has been providing all the requirements they need to thrive.

“It’s a really good sign and gives us hope that trout populations can be improved in the surrounding area.”