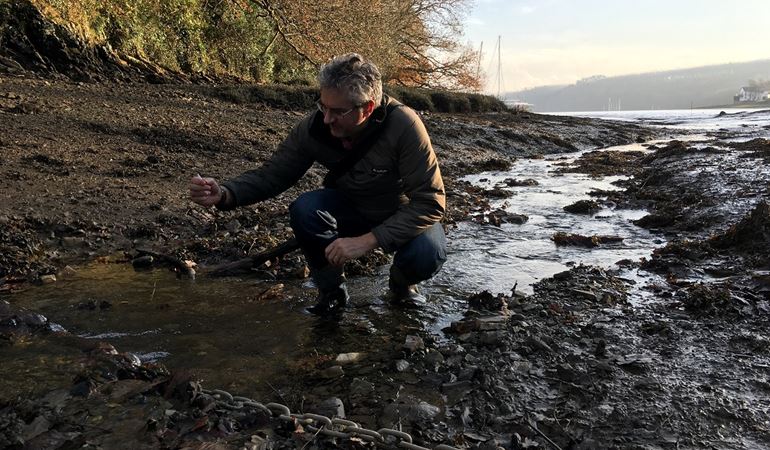 A hundred volunteers have braved the elements along the Milford Haven waterway to collect data which will help experts improve water quality in the area.

They have been rallied as part of the SWEPT (Surveying the Waterway Environment for Pollution Threats) project, led by the partnership of managers for the Pembrokeshire Marine Special Area of Conservation (SAC) in collaboration with the West Wales Rivers Trust, Pembrokeshire Coastal Forum and Darwin. SWEPT is supported and funded by Natural Resources Wales (NRW).

It aims to collect data about local water sources to allow NRW officers to target their efforts in helping to reduce the amount of pollution which enters the waterway.

Volunteers from the community patrolled 46 stretches of the estuary, from Dale to Canaston Bridge, surveying the shore for signs of pollution, plastic waste and non-native species.

They are looking for areas where fresh water enters the estuary – from small streams, drainage channels and run off points from fields and roads.

Samples are then tested for nitrates and phosphates – common sources of pollution from agriculture, industry and households - which contribute to poor water quality.

Since the project began in November 2018, the volunteers have surveyed the areas three times.  In the first survey alone volunteers clocked up 247 hours, took 729 photos and tested 190 water samples.

They will conduct one further survey at the end of February after which the findings will be reviewed and a report produced.

“The Milford Haven waterway is a rich habitat for wildlife and part of the Pembrokeshire Marine Special Area of Conservation, a designation that reflects the importance of its habitats and species at a European scale.

“Our officers work hard to stop pollution from entering the waterway, but with so many potential sources this can be challenging.

“The data which has been collected through the project is incredibly valuable to us, and will help to make sure we are targeting our efforts and resources in the right places to maximise the impact we can have.”

“I was taken by surprise by the amount of interest shown in the project, but the huge number of volunteers meant that we could extensively cover the waterway.

“The quality and amount of data generated has far exceeded our expectations and it is providing a more detailed picture of nitrate pollution than has ever been seen before.  Even the simple act of logging all the myriad of freshwater inputs is in itself a benefit.

“Hopefully we will be able to pinpoint areas where land improvements will reduce nutrient pollution, and when those are acted upon we will see an essential improvement in water quality which will in turn lead to improved condition for the SAC features within the marine environment.”

The Milford Haven Waterway is a European protected site – A Special Area of Conservation (SAC), and along the foreshore, a Site of Special Scientific Interest (SSSI).

The Pembrokeshire Marine SAC is currently in unfavourable condition within the waterway. The inner section of the waterway, Pembroke river and upstream, is currently failing to meet ‘good’ European standards.

In December 2018 and January 2019, two oil spills from the Valero refinery polluted the waterway. The investigations into how these occurred remains ongoing but two pipelines suspected of causing the pollution remain out of action after NRW enforcement action.

They cannot be used again until NRW is satisfied that they don’t pose a threat to the local environment.