A season with the Llyn Clywedog Ospreys 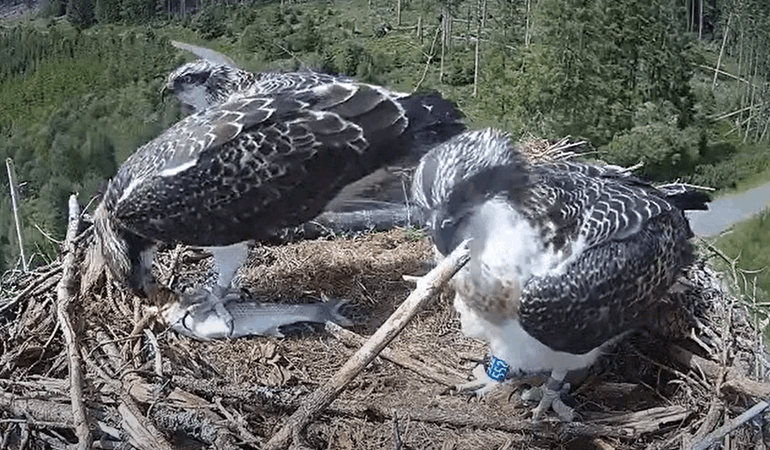 In March 2020, contractors and NRW officers visited an osprey nest by the banks of the Clywedog Reservoir near Llanidloes, to install live streaming camera equipment.

The nest - high up in a sitka spruce tree - was empty as they knew it would be. Ospreys are migratory birds that winter in Africa and hadn't returned yet. They had plenty of time to securely install the equipment on the treetop, facing the nest. These ospreys spend the summer by Llyn Clywedog and return to Africa in late August.

The nest had proven to be a productive incubator over the years, with 15 chicks fledging the nest and migrating since it was built in 2014. A camera had been placed there in the past but never before had there been the opportunity to watch the ospreys for 12 hours per day throughout the day via a live stream.

It was the culmination of months of planning and procuring but everything was finally in place and the first live stream began broadcasting on YouTube on 28 March.

All they had to do now was wait for ospreys to return.

The 'return' of the first osprey

Less than a week after the stream went live, an osprey was spotted on the nest on 1 April. People watching the live-stream were curious to find out if it was the resident male or the female - but it was neither.

Neither of the resident birds had been tagged - a process that can only be done with young ospreys. The osprey on the live stream however had a tag on its right leg. A blue tag that showed '5F'.

This surprised NRW officers and the small community of enthusiasts following the nest. After some research, they learnt that 5F was a female osprey that hatched on a Rutland nest in the East Midlands in 2012. As fiercely territorial birds, the community expected the resident female to arrive later and fight the new female to regain the nest - but she never returned.

Three days later, the resident male arrived back at the nest. In the following days they soon bonded and caught fish at the nearby reservoir and at ate at their newly rebuilt nest which had been ravaged by the winter weather. Live stream viewers were captivated by the blossoming relationship, holding out hope that they would soon see a small speckled egg joining the couple in the nest. 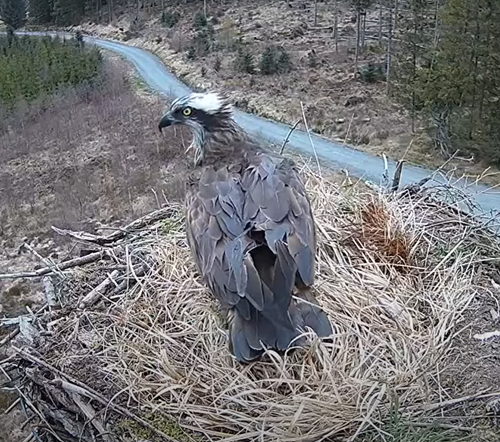 On 19 April at about 6pm, only 18 days after 5F had arrived at the nest, the first speckled little egg was laid, and viewers expressed their delight in the on-screen chat. They marvelled at the parents who both showed strong paternal instincts, protecting and sitting on the eggs to keep them warm. 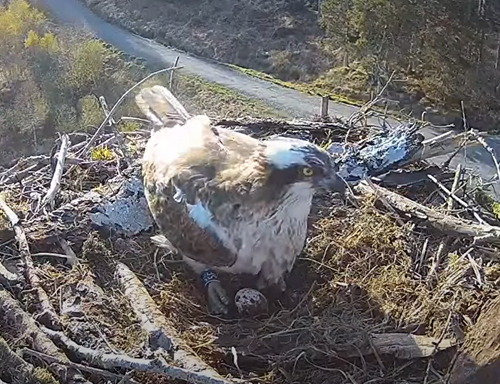 Three days later in the early hours of the morning and before the live stream commenced at 7am, 5F laid another egg. Two days later on 25 April at 8:50am she laid the third and final egg. As ospreys usually lay three eggs, the viewers' attentions turned to waiting for the first egg to hatch.

The expectant parents took turns to fish in the reservoir and to bring food for the other who remained in the nest to protect their eggs.

At 10:30am on 26 May, the ospreys and online audience alike watched on with anticipation as a tiny ball of fluff with a protruding beak began to emerge from the shell of the first laid egg.

In no time the little chick was receiving beakfulls of fish from its parents, gathering strength and growing quickly. 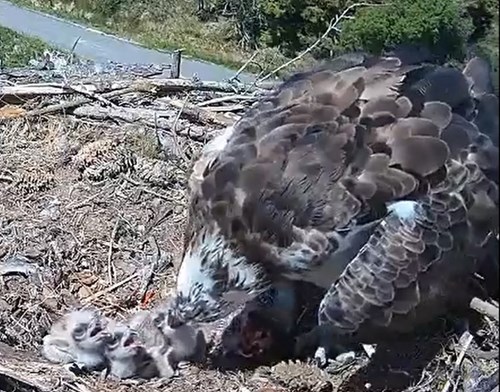 The nest was now home to a family of five and the new parents quickly adjusted to the need to catch a few more fish every day to feed their tiny, yet ravenous chicks.

Chicks from protected nests are ringed when they are about 30 days old. This is to help conservation efforts and to understand how birds travel, and where they stop off.

The 2020 Clywedog chicks were tagged on 4 July and were all found to be male. They were given blue tags on their right legs and were labelled 550, 551 and 552. The tiny balls of fluff had grown quickly into handsome young ospreys and weighed 1.25kg, 1.35kg and 1.45kg respectively; a sign of three healthy chicks. They were tagged in reverse order, with the first egg to hatch being tagged 552, and the youngest 550.

2020 was a special year also because it was the first year that one of the Clywedog chicks had returned to the area. The live cameras at the Dyfi Osprey Project caught an intruder one day. It was identified as KS8 - a female which was raised on the Clywedog nest in 2018. This was an important breakthrough for followers of the Llyn Clywedog nest as a ringed chick from the nest had never been recorded before this sighting.

The next milestone for the chicks would be a daunting one - fledging the nest. In mid-July they had been showing signs of preparation by practicing their helicoptering skills. This is a process by which a chick flaps its wings in the nest and is airborne for a moment. These practice jumps exercise and strengthen the wing muscles in readiness for flight. In this case the first flight means plunging from a nest 75 feet up a tree, flapping their wings and hoping that practice makes perfect!

Luckily for our three chicks - they succeeded with flying colours. 551 - the second chick - was the first to fledge on 17 July when he was only 49 days old. The first flight tends to be a short one to a nearby tree or in a quick circle before returning the safety of the nest. The successful flight - and return - was a huge cause for celebration for the viewers!

Soon after the daunting first flight, the chicks spent much of their days flying around the area - and were quickly catching their own meals, giving some much needed respite to their parents!

An osprey's diet consists entirely of fish. The healthy fish population in Llyn Clywedog’s waters and the large expanse of trees that surround it provides the perfect habitat for ospreys. 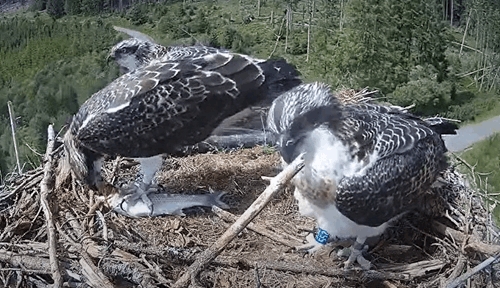 They ospreys caught all the fish commonly found at Llyn Clywedog including perch, rainbow trout and brown trout. The adult male however once brought back a mullet - a sea fish that could only have been caught in or near the Dyfi Estuary, 13 miles away. This was very interesting to the viewers and was something that they would never had known without the live stream camera.

The estuary is home to the Dyfi osprey project, and it is suspected that the adult male caught the mullet after chasing away a male from the Dyfi nest when it intruded on Llyn Clywedog.

Time for some winter sun

In late August, after the chicks had learned how to fish and had become confident young fliers, the next step was to gain strength and set off on their own.

Once they take flight for the winter, there is the possibility that they will never return to the nest from which they hatched, opting instead to start their own nests to raise their own chicks.

This is a typical migration pattern which indicates that the birds were well prepared.

2020 was a successful year for the Llyn Clywedog ospreys. In only 151 days a new adult female took over the nest, a new pairing was formed, a nest was rebuilt, and three young chicks were successfully raised to fledging and migration.

The most likely outcome is that both adult ospreys return and try to raise three more chicks.

However, the unpredictable nature of the residents of this nest means that we cannot be certain of what 2021 will bring. The previous resident female never returned in 2020.

The camera equipment has now been removed for the winter. NRW officers will now set about discussing any improvements that can be put in place before live streaming begins in earnest yet again in spring 2021 in the hope that the nest will provide another summer of entertainment to osprey enthusiasts around the world.