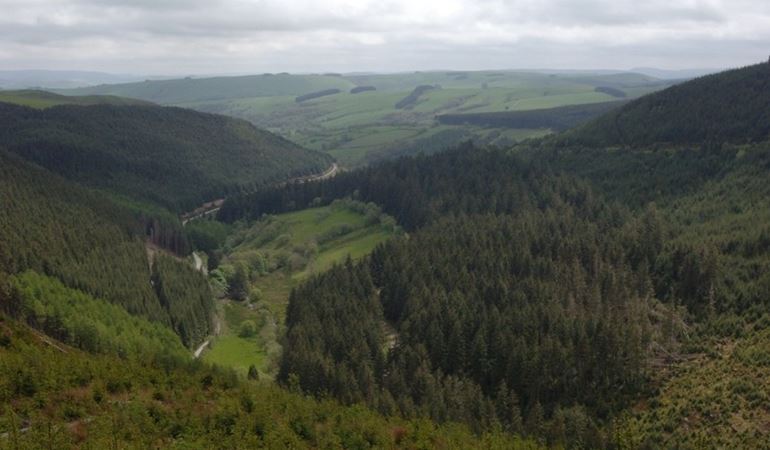 As National Tree week gets underway, Natural Resources Wales (NRW) has announced that preparation work has begun to plant two new woodland creation sites near Clocaenog and Hafren forests as part of a project to expand the Welsh Government Woodland Estate (WGWE)

The work carried out over a combined total of 60 hectares of land at Hafren and Clocaenog, aims to provide compensatory planting for woodland that has been lost from the WGWE, such as through wind energy developments or restoration of non-woodland habitats like peat bogs.

This will help to deliver the Welsh Government’s Woodland for Wales Strategy and contribute to tree planting targets in Wales, as well as maintaining the WGWE ability to grow harvestable timber.

Woodlands play a vital role in helping to lock up carbon, mature mixed woodlands can store around 300-500 tonnes of CO2 equivalent per hectare, with the exact figure dependant on age and species composition.

They also deliver a range of other benefits, including providing shelter for livestock, reducing noise pollution, slowing down flood waters and improving air, soil and water quality.

NRW have committed to planting at least 350ha to compensate for woodland lost to renewable energy developments.

The land purchased near Hafren and Clocaenog will be planted this winter and form part of this target, with the remainder planned by 2023.

The new woodlands will be designed with consideration for the specific site conditions, the surrounding landscape and in accordance with the UK Forestry Standard.

Both sites will be planted with a mix of productive conifer elements integrated with native broadleaves to add habitat diversity and connectivity to existing native woodlands and trees through the landscape.

This will help to ensure the new woodlands are more genetically diverse and more resilient to the impacts of pests, diseases and climate change.

Work began at the site near Hafren forest in mid-November to mark out the design of the new woodland in preparation for the ground preparation to start this week.

Once the sites are established, they will be managed by NRW as part of the Welsh Government Woodland Estate.

Creating new woodlands and increasing the number of trees planted in Wales is really important as they will provide multiple benefits for our economy, the environment and the people of Wales for years to come.

Our forests and woodlands play a vital role in our fight against climate change, helping to lock up carbon and reduce air pollution. They also play in an important part in supporting biodiversity and provide people with spaces for leisure and recreational activities which improve health and wellbeing.

We’ll be working closely with local stakeholders and the forestry sector to ensure that any impacts a new woodland may have on the surrounding areas are considered and to ensure we are taking advantage of the best new learning and ideas on successful woodland creation.

In addition to the land at Clocaenog and Hafren, NRW are also working towards acquiring at least another 150 ha for new woodland creation by the end of this financial year.

Although our work to expand the WGWE is only a small part of the overall national tree planting effort, it is exciting for us to be acquiring land and creating new woodland so that we will have a larger estate in 25 years than we do now which will help support the ongoing work to tackle to the climate and nature emergencies.