Continue
Home > About us > Our projects > Marine projects

About the project
Background
Survey cruises
For more information

Relationships between the physical environment and seabed habitats recorded in the southern Irish Sea were analysed to develop a model that would allow habitat occurrences to be predicted in areas where survey data does not currently exist.

The predictive maps produced by the project were validated using data collected during survey work in four areas of the southern Irish Sea:

The HABMAP project built on previous projects, such as:

The project also linked with other contemporary projects, such as MESH (Mapping European Seabed Habitats) and UKSeaMap.

HABMAP was initially partly funded by the INTERREG IIIA programme for Ireland and Wales and included partners from a variety of organisations on both sides of the Irish Sea.

Following this the Countryside Council for Wales carried out further work to extend coverage of the project to include all of Welsh waters.

The seabed of the Southern Irish Sea contains a diverse range of habitats and species, from algae dominated rocky reefs to deep muddy areas inhabited by burrowing animals. To varying degrees all of these habitats can be utilised by mankind, through activities such as fishing, aggregate extraction and development of renewable energy resources offshore. In addition, some are priority habitats or contain listed species under European Commission (EC) and international legislation.

Attempts to manage the seabed are currently hampered by our relative lack of knowledge and lack of spatial data in the form of seabed maps, and the Irish Sea has been recognised as a priority in this regard. The need for habitat mapping has been identified by several organisations throughout Wales, Ireland and Europe (eg OSPAR, ICES, European Environment Agency) and habitat maps will be crucial in implementing a variety of different pieces of marine legislation including:

The habitat maps produced by HABMAP have been used as part of Wales- and UK-wide initiatives such as the Welsh Government led Marine Conservation Zone project, and UK-wide Marine Protected Areas stocktake. They have also been used to help inform Marine Planning and baseline assessments for various pieces of marine casework.

Two HABMAP survey cruises were carried out on the RV Celtic Voyager in collaboration with:

The aim of the first cruise was to use multibeam swath bathymetry to collect information about the depth and nature of the seabed. Multibeam is an acoustic technique that sends a fan of sound signals down to the seabed and then analyses the way in which the sound bounces off the seabed and returns to the survey ship.

Data collected in this way gives us detailed information on the seabed depth (bathymetry) and also some information about the nature of the seabed (eg sediment types) by analysing backscatter. 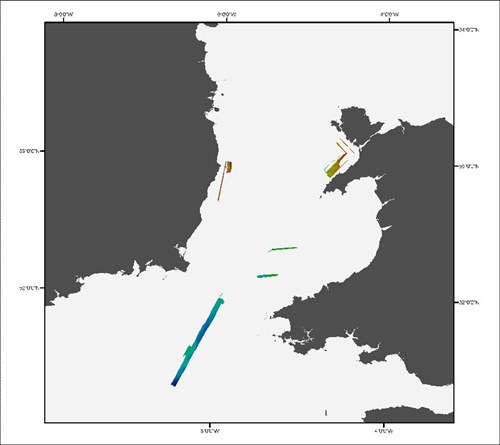 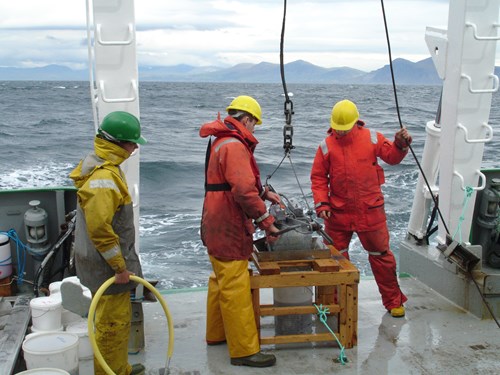 The aim of the second cruise was to gather data about the biology and sediments of the areas surveyed in the first cruise. A sledge mounted video camera was used to take videos of the seabed. Grab samples were taken for information about sediments and biology. Sediment profiling imagery was also used to take pictures through sediments to better understand their composition.

Grab sampling on board the RV Celtic Voyager during the HABMAP project surveys.

Benthic sample processing on board the RV Celtic Voyager during the HABMAP project surveys. 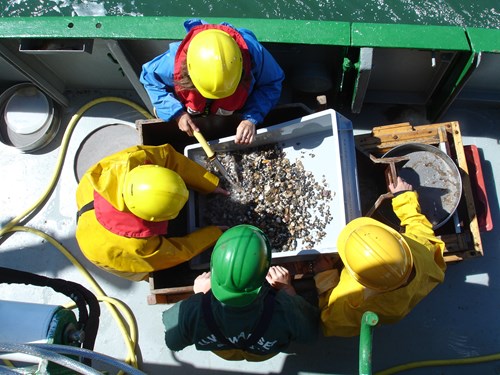 This was a four stage process that involved:

The model was validated using data collected during the HABMAP survey cruises as well as that supplied by other concurrent benthic sampling projects. 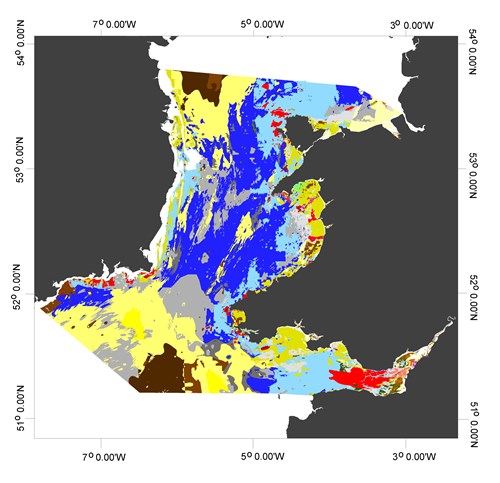 Map showing benthic habitats that are known or predicted (from HABMAP modelling) to occur in the Southern Irish Sea.