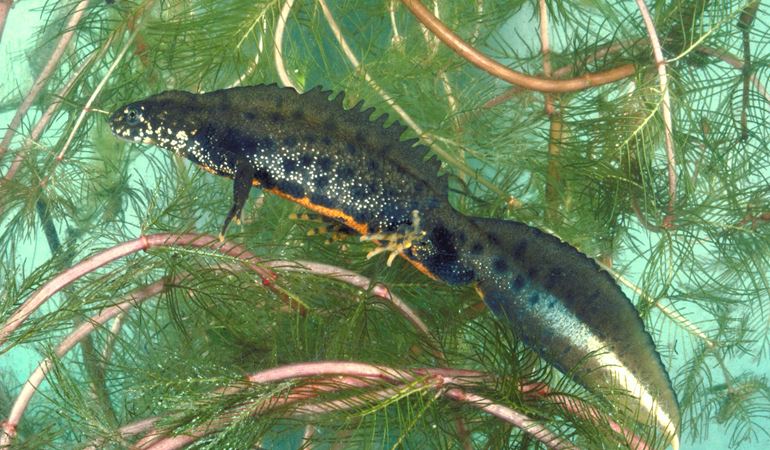 A newly released report has shown that an important conservation project’s work to revitalise sand dunes across Wales will also improve the breeding habitat for the European protected species, the great crested newt.

A series of surveys was run as part of Natural Resources Wales’s Sands of LIFE project at Tywyn Aberffraw, Newborough Warren, Morfa Harlech and Kenfig, which are all Special Areas of Conservation (SAC) with historic records and known populations of great crested newt.

Part of the Sands of LIFE project’s work is to re-profile and scrape areas of the dunes at the four sites. The report found that this work should create springtime open water habitat in the slacks that could be used by great crested newt for breeding.

Being a European protected species, population assessments of great crested newts across the proposed intervention areas were required to determine if adverse effects or harm is likely to be caused to the species as a result of the project’s work. Where likely effects were identified, avoidance and mitigation measures are being arranged.

“We are glad to be able to share the Sands of LIFE great crested newt report findings. As a European protected species, our project is doing everything possible to ensure that the current populations found across our work areas are not only safe but are also provided with the best possible conditions to thrive in the future.

“We are also happy that the increased possibility of open water habitat within the dune slacks as a result of our work may boost the species in the future. This is evidence to support our aim to revitalise habitats which are home to some of our rarest wildlife.”

The great crested newt is Wales’ largest newt at 15cm, and both males and females have orange bellies with black spots. It is the male that develops a serrated crest along its back. It relies on ponds that are free from fish and suitable terrestrial habitat nearby for foraging, shelter and hibernation.

It is against the law to damage or destroy a great crested newt breeding site or resting place (pond or terrestrial habitat), or deliberately to capture, kill, injure or disturb the species.