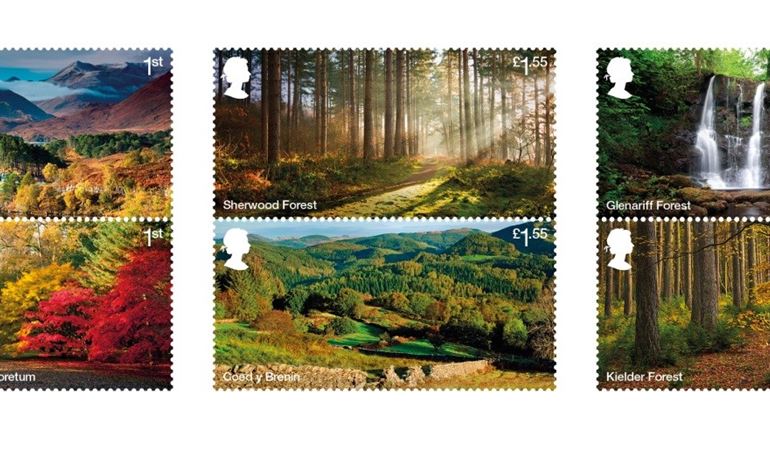 Royal Mail today (6 August 2019) revealed a set of six Special Stamps that capture beautiful and inspirational views of forests from across the four countries of the UK.

Valued for their environmental benefits, such as cleaner air, flood prevention and providing habitats for wildlife, the UK's forests generate hundreds of millions of visits per year - enabling the public to enjoy woodlands for activities from walking and picnicking to birdwatching and mountain biking. The stamps showcase the character and varied colours of the nation’s forests and are available to pre-order now from www.royalmail.com/forests.

The stamp launch coincides with the 100th anniversary of the Forestry Commission. Founded on 1 September 1919, the Forestry Commission’s remit was to reforest the UK for timber after the First World War had seen clearances of huge areas for the war effort. From those small shoots in 1919, the Welsh Government Woodland Estate, managed by Natural Resources Wales, today covers an area of 126,000 hectares – that’s 6% of Wales - and it supplies approximately 50% of all timber in Wales.

"Trees have a special place in the lives of communities now, just as they did in 1919, and will in 2119. Celebrating this centenary is all about inspiring people to share our passion for woodlands and forests and help us protect and improve them for generations to come.”

“On the Forestry Commission’s centenary these striking new stamps celebrate the beauty and tranquillity of our public woodlands, and the inspiring range of environments which receive hundreds of millions of visits each year.”

The stamps go on general sale on 13 August from www.royalmail.com/forests and in 7,000 Post Offices throughout the UK.

Located near Dolgellau in the Snowdonia National Park, Coed y Brenin is now one of the flagship forests of Natural Resources Wales. Commercial softwood forestry across some 7,650 acres (3,093ha) of Forest Park combines with recreational facilities for mountain-bikers and a network of spectacular scenic trails for hikers, based around the impressive visitor centre.

Glen Affric in Inverness-shire, is managed by Forestry and Land Scotland and is a fragment of the once extensive Caledonian Forest. Its rugged Scots pines and graceful birches are the signature trees in a landscape where forest, lochs, river and mountains combine to create the perfect Highland setting, which is breath-taking at any time of year but especially when the birches take on their golden apparel.

Sherwood Forest in Nottinghamshire is famous for its rich assemblage of ancient oak trees, such as the Major Oak. The atmospheric image on the stamp shows a fine stand of conifers in the early morning light, reflecting the mixed planting found across the whole forest.

Managed by the Forest Service Northern Ireland, Glenariff Forest Park in County Antrim, boasts a beautiful mixture of views and trails that allow the visitor to enjoy a wide variety of walks and activities. Probably the most spectacular of these is the Waterfall Walk, a steep path up the vertical sides of the gorge and along elevated boardwalks taking in a succession of dramatic and world-famous waterfalls.

Westonbirt, The National Arboretum is the Forestry Commission’s flagship collection of trees in England. First created by the wealthy Holford family almost 200 years ago, it is one of the most beautiful and diverse botanical collections in the world. The 600-acre (243ha) site with 17 miles (27km) of paths showcases 3,000 tree species, including the Japanese maples seen on the stamp in autumnal colours.

Kielder Forest in Northumberland is the largest human-made forest in Britain, stretching 250 square miles (647sq km); around 75 per cent is covered by trees. The Forestry Commission harvests around 500,000 cubic metres of timber here each year. The felled areas are replanted using a mixture of conifer and broadleaf trees, and parts are left open to create a diversity of habitats.

Forests through the ages: The first written evidence of forests designated as royal reserves comes from the Domesday Book of 1086, which recorded only about 25 of these sites. Most forests known today were established by the 13th century. When the Magna Carta was sealed in 1215, there were almost 150 forests in England alone, amounting to nearly a million acres.

Over time, the Crown relaxed its hold over the forests, and the local landowners and commoners usually came to mutually beneficial modes of forest governance and management.

In the early 20th century, extensive tree felling left the country’s timber resources severely depleted. The First World War in particular had a huge impact; by the end of it, with forests ravaged in support of the war effort, the UK’s woodland cover was at an all-time low of just five per cent. In response, the Forestry Act was passed, and in September 1919 the Government established the Forestry Commission, demonstrating its support for the creation of productive, state-owned forests to replenish the much-depleted supplies of home-grown timber.