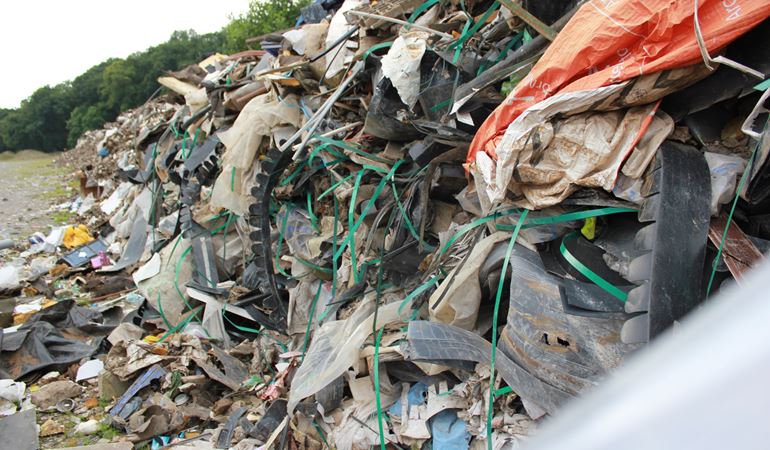 Three men and a company charged with a series of illegal waste offences have been sentenced for carrying out multi-million pound illegal waste operations at two sites in Resolven and Skewen, Neath.

Dennis Brian Connor of The Barn, Pantlasau, Morriston, Howard Geary Rees of Rheola House, Resolven, and Eurid Huw Leyshon, of Pentwyn Farm, Skewen, were between them given a total of 52 months suspended prison sentences, 280 hours of unpaid work, and ordered to pay back over £353,000 within three months under the Proceeds of Crime Act.

Swansea Crown Court heard that the four defendants criminally benefitted by nearly £5m between them, in avoided legitimate costs.

The sentencing is the culmination of a four-year complex and thorough investigation carried out by Natural Resources Wales. The case had taken two years progressing through Court, due in part to Covid delays. 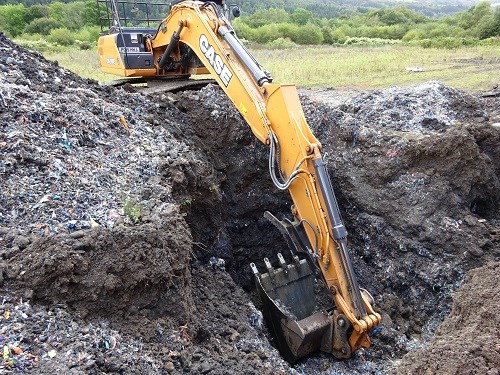 Dennis Connor had earlier pleaded guilty to two counts of consenting or conniving in offences by his company, DBC Site Services 2005 Ltd, in which he knowingly allowed the disposal of controlled waste without an environmental permit at the two sites.

Connor was sentenced to 20 months in prison, suspended for 18 months, plus 100 hours community service on Friday, 19 November, 2021.

Proceeds of Crime proceedings were also concluded against Mr Connor. The court found that the benefit gained from his criminal activities totalled £1,121,554.75. His available assets for confiscation were £177,908.13, and he was ordered to pay this sum within three months. He was given a default sentence of 21 months’ imprisonment if he fails to pay in this time.

Howard Rees had pleaded guilty to two counts of disposing of waste in a manner likely to cause pollution of the environment or harm to human health, and operating a waste facility without an environmental permit, at Rheola. He was sentenced to 16 months imprisonment suspended for 18 months, and given a community order to complete 100 hours of unpaid work.

Proceeds of Crime proceedings concluded against Mr Rees found that the benefit gained from his criminal activities totalled £1,405,933, but only £66,841.77 was available for confiscation, which he has been ordered to pay within three months. He was given a default sentence of eight months’ imprisonment if he fails to pay.

Huw Leyshon had pleaded guilty to two counts of operating a waste operation without a permit at Pentwyn Farm, Skewen. He was sentenced to 16-month imprisonment, suspended for 18 months two offences, and given a community order to complete 80 hours of unpaid work.

Proceeds of Crime proceedings concluded against Mr Leyshon found that the benefit gained from his criminal activities totalled £1,296,197.80. His available amount for confiscation was £108,313.14, which he has been ordered to pay within three months. He was given a default sentence of 12 months’ imprisonment if he fails to pay.

“We hope the outcome of this case will send out a positive message to those who seek to profit by breaking the law, that Natural Resources Wales will not tolerate harming local communities or damaging the environment.

“The impact of these activities went beyond the boundaries of the defendants’ land and affected the wider area.

"Disposing of waste illegally undermines businesses that invest in the required measures and so it is essential that we take action in such cases to protect people and the environment, as well as safeguarding the marketplace for legitimate operators.”

NRW put the site under surveillance and observed large vehicles depositing waste on the site. Large excavators were seen burying the material in deep trenches, and then flattening the ground so that it soon became hidden from observers. One of these lorries was registered to DBC Site Services 2005 Ltd, and investigations showed that Dennis Brian Connor was the sole director of this company.

There were no environmental permits or waste exemptions in place at any of these locations. 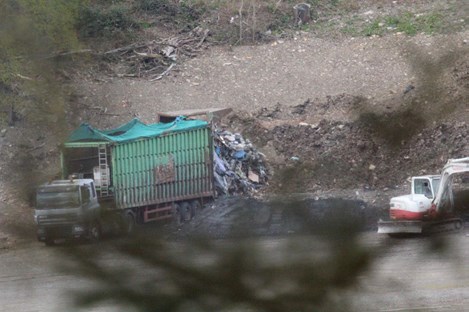 A simultaneous search was carried out at the office of DBC Site Services (2005) Limited in Clydach, and the private Morriston residence of Dennis Connor, who was also arrested. Multiple documents were seized by NRW officers working with the police.

At the Old Rheola Aluminium Works site, many huge piles of waste were found to have been recently tipped on the ground. These piles consisted of different types of waste, including rotting household waste clearly from the Swansea and Carmarthen areas, finely shredded plastics, and coarsely shredded oily vehicle parts.

An electromagnetic geophysical survey was commissioned at the Rheola site by NRW, which confirmed the surveillance observations that waste had been buried. NRW then excavated trial pits, or trenches, to expose this waste. Considerable volumes of wastes were discovered buried up to four metres deep. Amongst this were large volumes of municipal wastes from Swansea, oily scrapyard waste, and hazardous clinical waste. 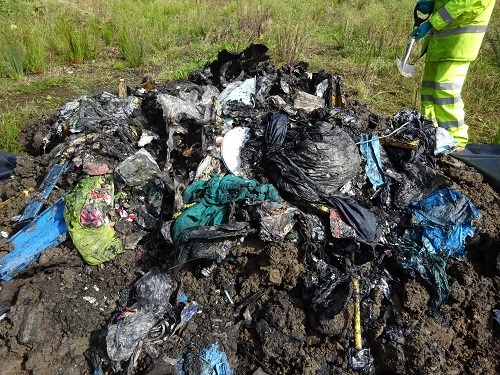 The clinical waste was traced by investigators to an NHS hospital trust in South East Wales, and it contained syringes with needles still attached, and shredded orange infectious waste bags. This waste was classified as hazardous and can only be legitimately disposed of by high temperature incineration. The hospital trust had passed the waste to another company for legal disposal in good faith, was horrified to hear of the discovery, and cooperated fully with the NRW’s investigators.

Some of the buried waste also contained asbestos, and the court heard that this and the hazardous clinical waste substances posed a risk to human health and the environment.

Howard Rees admitted that he had kept a tally of the lorries and loads brought onto his land, and seized documents showed that he had been paid ‘tipping fees’ by Connor for the disposal. Phone records showed that Rees had also been in contact with a lorry driver bringing waste to Rheola from Rotherham.

Dennis Connor admitted disposing of the municipal wastes from the Swansea and Carmarthen areas at Rheola, and later admitted that he had disposed of an additional 2676 tonnes of Refuse Derived Fuel (finely shredded household waste) at Rheola House, and for that alone he had been paid over £208,000.

Examination of the documents seized from DBC Site Services disclosed that huge volumes of waste, in hundreds of lorry loads, had been transported from scrapyards in Birmingham to nearby Pentwyn Farm, Skewen. NRW officers travelled to Birmingham and inspected the scrapyards with colleagues from the Environment Agency. They found that Dennis Connor had been contracted by the scrapyard company to dispose of their oily trommel fines waste over several years. NRW dug trail pits at Pentwyn Farm and found very large volumes of the fine oily waste had been deposited up to 11 metres deep. The farm was occupied by Huw Leyshon, who had been paid by Connor for the waste disposal.

There were no environmental permits nor any registered waste exemptions in place at Pentwyn Farm, and the oily nature of the waste meant that it was likely to be hazardous and posed a risk to the environment.